Here are some tips with regard to interjections

1) Interjections are words that:

2) If the interjection expresses a really strong feeling, it ends with an exclamation point.
Example: Ouch! That hurts!

3) If however the feeling is not that strong, it is set apart from the rest of the sentence by a comma.
Example: Ouch, that hurts.

Sentence tips for the IELTS are next.
Posted by Unknown at 8:03 AM

Some tips with regard to prepositions.

1) A preposition is a word that shows how a noun or a pronoun relates to another part of a sentence.

4) Finally, in order to avoid having a wordy sentence, never use lots of prepositional phrases.

Interjection pointers are next.
Posted by Unknown at 3:43 PM

Here are some tips about Conjunctions.

1) A conjunction is a word that joins words or groups of words.

2) Some examples of conjunctions: and, but, yet, for, so, or, because.

Example: Alma guessed that Jon was the person who knocked at the door. And she was right!

4) Also, as a general rule, avoid using a comma every time you see a conjunction.
Exception: You could use a comma before a conjunction that introduces an independent clause.

Example: Paolo went to park, and Lougene went to the mall.

5) Finally, don't overuse the conjunctions "and" and "so" in a sentence or paragraph.

Preposition tips are next.
Posted by Unknown at 10:21 AM

1. Many adverbs are formed by adding "-ly" to the adjective.
Examples: slowly, mildly, quietly

2. Some words can either be adjectives or adverbs depending on the manner they are used.
Example: "high"

3. Some adverbs have two (2) forms: one which has "-ly" added to it, and the other without the "-ly". The two 2 forms have different meanings.
Example: "late"

5. Some adjectives have "-ly" added to it.
Examples: hourly, lovely, early

7. With regard to adjectives that compare:

b. Use "more" and "most" or "less" and "least" when it comes to some longer adjectives and adverbs.
Example:

d. Some adjectives are already superlative.
Examples: first, only, perfect

8. Where you place the adverb affects the meaning of the sentence.
Examples:

Conjunction tips are next.
Posted by Unknown at 6:21 PM

Here are some things to keep in mind when it comes to verbs.

Well, for a review, a verb is a word that shows action or a state of being.


Now that we're reminded of what a verb is, here are the tips:

1) Be consistent with tenses.

2) With regard to infinitives (a verb with the word "to" ahead of it), remember not to put lots of words between the "to" and the verb, otherwise you risk confusing your reader.

3) Use the active voice most of the time. You could use the passive voice when:

- you want to be polite

- emphasis should be given on the thing being talked about

- writing in an impersonal, scientific manner

4) Gerunds (verbs ending in "ing") are usually used with possessive nouns or pronouns.


5) Use the subjunctive mood in "what if" or "if only" sentences, or for suggestions, commands, urgency, and recommendations.

6) Be careful of irregular verbs. While some follow a pattern, others do not.

There are many other similarly situated irregular verbs, That's why we have to be careful of these things in the IELTS.

Adverb and Adjective Pointers are next.
Posted by Unknown at 5:47 PM

7 Tips for Multiple Choice Questions in the IELTS Listening Module

Let me share with you some tips for handling multiple choice questions of the IELTS Listening Module. Here they are:

1. Read the questions and predict the types of information you need before starting the module.

3. Keep track of the time. You have a few seconds to read each section before you listen. You will however have ten (10) minutes at the end to put your answers on the answer sheet.

4. Each listening text will only be heard once; it is important that you look for key words and phrases before you actually start the exam.

5. The questions are in the same order as you hear the answers.

6. Don't spend too much time trying to think of an answer.

7. If you need to make a guess, base it on key words and phrases you have heard.

There you have it. Some verb pointers are next.

Incidentally, whenever this lesson pops up, I'm reminded of the character Grimlock, one of the Dinobots in the Transformers series. 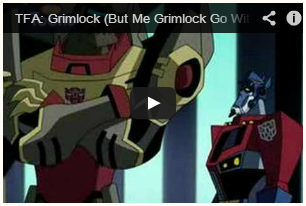 Anyway, let's get back on track. Here are some sentences:

As you may have noticed, each of the red-colored pronouns is not correct.

First, either add more words to the sentence, or delete some words, until you can choose the better sounding pronoun.

Examples of situations where you add words:

An example of a situation where you delete words.

Or second, you could turn the sentence around and figure out what sounds right.

What do you notice?

In other words, the two sentences are correct. Take note however, that they have two totally different meanings.

More related stuff in the next lesson.

Email ThisBlogThis!Share to TwitterShare to FacebookShare to Pinterest
Labels: grammar, he, Highpoint IELTS, him, IELTS, Pronoun

After the basics, we now proceed to our next lesson - antecedents.

I am Alma.
I is a pronoun. Who or what does it stand for? It stands for Alma. The antecedent of I is Alma.


(2) The pronoun almost always refers to the noun closest to it. If you put pronouns in peculiar places, it’s hard to tell what the antecedent is. Sometimes sentences can get pretty weird.

WEIRD:
It was too dark and my dog was still outdoors. I grabbed my lamp to begin the search and listened for its bark.
(The antecedent of its appears to be flashlight.)

BETTER:
It was too dark and my dog was still outdoors. I grabbed my lamp to begin the search and listened for Bruiser’s bark.

WEIRD:
While driving it at 160 kph around EDSA, Jun swerved to avoid hitting an old man and landed his car on the sidewalk.
(The pronoun it appears early in this sentence, but we don’t find out what it is until the end of the sentence – and by that time we have an old man and a sidewalk to deal with as well.)

BETTER:
While driving his car at 160 kph around EDSA, Jun swerved to avoid hitting an old man and landed on the sidewalk.

WEIRD:
I’ve been to the Philippines, and I like them because they are very kind to tourists.
(The antecedent has been left out of this sentence. Who are they?)

BETTER:
I’ve been to the Philippines, and I like the Filipinos because they are very kind to tourists.

A Pronoun is a word that stands in for a noun.

8 WAYS WE USE PRONOUNS :

We have discussed tips about capitalizing nouns and about possessive nouns. Now we discuss some tips on how to make plural nouns.

5. If the word ends in Y and there's a consonant before the Y, change the y to i and add es:

7. If a compound noun (a noun containing more than one word) has a main noun in it, add the s to the main noun:

8. If a compound noun has no main noun in it, add the s at the end:

Looks easy so far, right?
Not so fast...

9. There are some nouns that stay the same whether you refer to the singular or plural form:

12. Other nouns are based on rules from foreign languages :

13. There are other nouns which do not follow the above rules :

14. Just to be sure, consult your dictionary to determine the correct plural form for each word.

How to Use an Apostrophe

Hello everyone. I just thought of sharing this comic with you. This complements our earlier discussion about the 9 Tips about Possessive Nouns.

Do remember that your IELTS examiners check for punctuation errors in your written work, so learn more about this punctuation mark in The Oatmeal - How to Use an Apostrophe.

Other comics relating to grammar and punctuation from The Oatmeal:
What it means when you say "literally"
When to use "i.e." in a sentence
How to Use an Apostrophe
Ten Words You Need to Stop Misspelling
Posted by Unknown at 3:02 PM


These are commonly misspelled words according to The Oatmeal. To know why, read his funny comic The Oatmeal - Ten Words You Need to Stop Misspelling.

Other comics relating to grammar and punctuation from The Oatmeal:
What it means when you say "literally"
When to use "i.e." in a sentence
How to Use an Apostrophe
Ten Words You Need to Stop Misspelling
Posted by Unknown at 10:40 PM

Previously, we talked about the tips on how to capitalize nouns. Now, we discuss some tips about possessive nouns.

1. When we want to show that someone owns something, we use possessive nouns.

2. To make a noun possessive, usually add an apostrophe and an s

3. Most of the exceptions to this rule are old-fashioned or historical names:


4. If two people own the same thing, use an apostrophe and s for only the second person.

5. If the two people don't own the same thing, use an apostrophe and s for both people.

7. Inanimate objects usually don't own things, but some possessives are fine.

8. What about the example the table's leg? It's fine, but in formal writing such as in Task 2 of the IELTS writing module, it should be the table leg or the leg of the table. The same is true with this example.

9. Proper nouns (people names) that end in s can be confusing.

Attribution to Rebecca Elliot for her book Painless Grammar (c) 2006, 1997

When do you capitalize nouns?


What about mom and dad? Capitalize them when you're calling your parent's name, but not when you refer to "my mom" or "my dad."

2. Days of the week, months, and holidays, but not seasons

3. Ranks, and titles, but only when used with a particular persons' name

5. Regions of the United States, but not simple directions

7. Religions, nationalities, races of people, languages, countries and adjectives related to those countries

8. The various names for God and the names of sacred books

12. Names of planets, except sun and moon and sometimes not earth

14. Names of specific teams and clubs and their members

Attribution to Rebecca Elliot for her book Painless Grammar (c) 2006, 1997