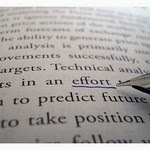 
Reduce errors, especially those which are the result of oversight. One of the ways to achieve this is to make it a habit to mark your keywords. Do keep in mind that the diligence you put in marking them would contribute to increasing your chances of getting a high band score. Negligence in marking them, on the other hand, increases the likelihood of committing unnecessary mistakes.
Posted by Unknown at 11:02 PM